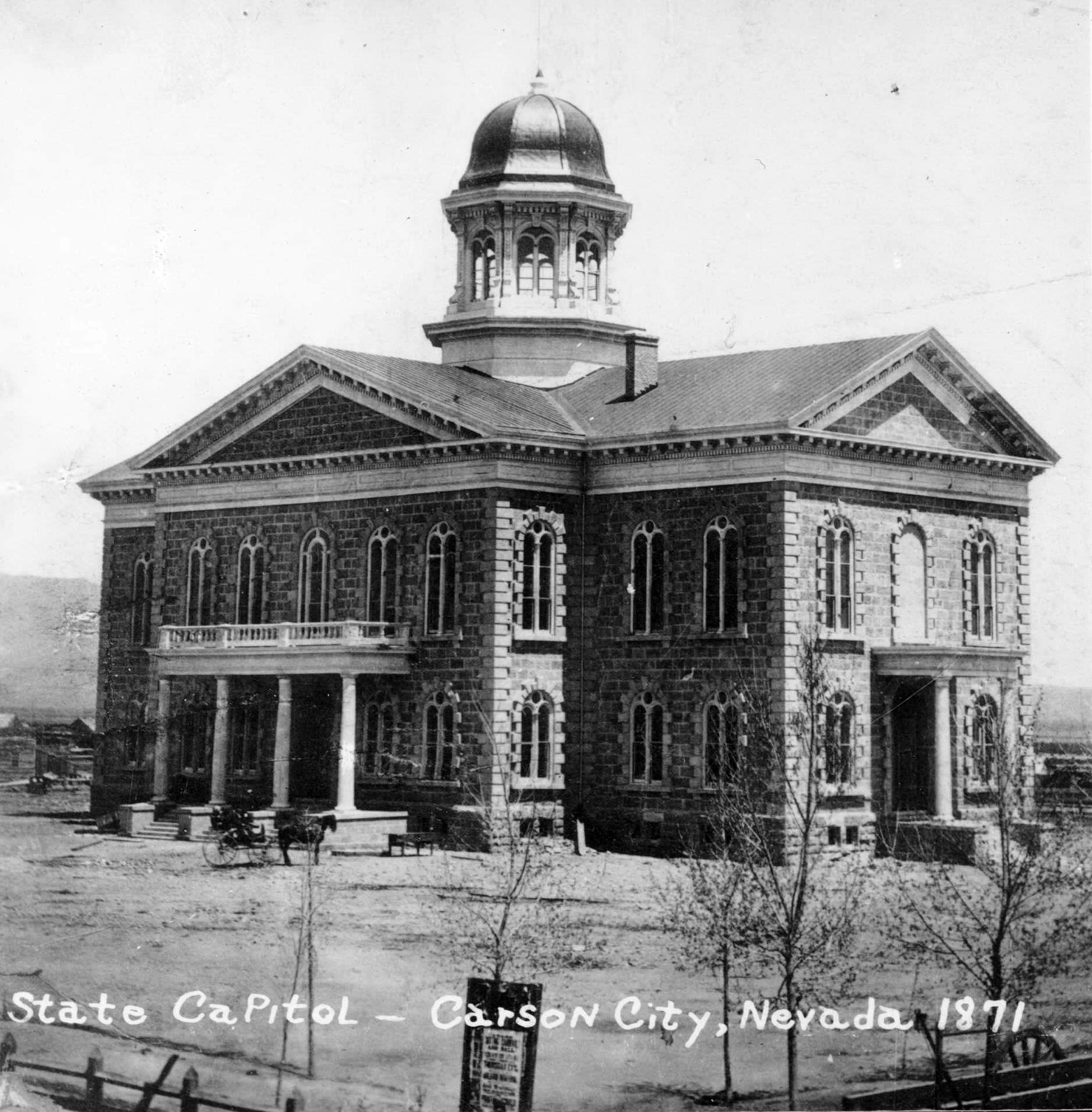 In 1858, Abraham Curry bought Eagle Valley Station Ranch and names it Carson City. He began to lay-out the plans for development, setting aside a four acre plaza in the center for the anticipated State Capitol. It was pretty farsighted of him, considering we weren’t even a territory in our own right yet, still part of the Utah territory.
Six years later, we were granted statehood, and the fight was on for the determination of the location of our capital; Virginia City had the greatest population. Dayton claimed a convenient location on the Carson River. Genoa claimed to be the first white settlement. All this contention kept us in limbo until 1869. During this time, the Legislature met at the Hot Springs Hotel in Carson City, which happened to be owned by Abe Curry.

Finally, due to a lot of influence by Curry, the present site was accepted. A contract for $84,000 was entered with Peter Cavanaugh & Son to build and furnish the Capitol and construction was started. The walls are made of sandstone, our state rock, which was supplied by who else, Abe Curry, from his quarry at the hot springs. A lot of the labor was provided by inmates at the State Prison, also located at the quarry, under Curry’s control.
In 1871, the Capitol building was completed at a cost of $170,000 plus $20K for furnishings! At that time, both the outer and inner walls were sandstone with the space between filled with whatever rubble would fit. When completed, the Capitol contained the entire government of the State of Nevada, all three branches.
The dome (now silver- painted fiberglass) was wooden and painted “barn red”. The dome was used to store papers, books, records of all sorts until the floor started to sag from the weight. Additionally, bats had taken up nesting in the dome and would come into the building through the opening.
In 1907, the floor of the dome was re-enforced and closed off to direct access. The “Octagon Annex” was added to the eastern portion and used as the State Library and Archives. In 1915, when we needed to expand the size of our Legislature, the Capitol was enlarged to almost twice its original size by the addition of the north and south wings.
The Capitol grounds are surrounded by an black wrought-iron fence. In the early days, the land surrounding the Capitol was rural and agricultural. There were horses, cattle, pigs, chickens, etc. roaming freely on the grounds. They left the usual animal messes, which the ladies of the era objected to due to their long skirts. In 1875, the fence was constructed by Hanna Klapp, a local school teacher under a contract for $5500. She bought the materials from Philadelphia, hired some local workman, and still made $1000 on the deal. [Note: In the meeting, Gene cited evidence that Klapp may have been a lesbian. –Metric]
Among the many trees on grounds is out State Christmas Tree, just to the southwest of the main entrance. It is a 100 foot tall Norwegian Spruce. The tree was donated and planted in 1876 by a local businessman, George Washington Gale Ferris, Sr. His son in vented the Ferris Wheel. Each year, it gets highly decorated for the Holiday Season. Because it is now over 140 years old and showing signs of age, Nevada has planted a Colorado Blue Spruce on the north side of the plaza to replace the original when the time comes.
To retrofit for earthquake safety, the building was renovated in the 1970s. The elevator was also added at that time, as well as electrical, plumbing, heating and air conditioning.
The Capitol still contains the offices of the Governor, Lt. Governor, Secretary of State, Treasurer and Controller. The Supreme Court is now located to the south of the Capitol, as is the Legislative building. The State Library and Archives are on Stewart Street, just behind the Capitol. The office of the Attorney General is across Carson Street, where the Supreme Court had its building.
Our Capitol is a beautiful Victorian-style building, full of local history. Please come and visit it when you’re in Carson City. It’s open every weekday and on Saturdays. Guided tours are available, or just walk around, take pictures and enjoy the culture.