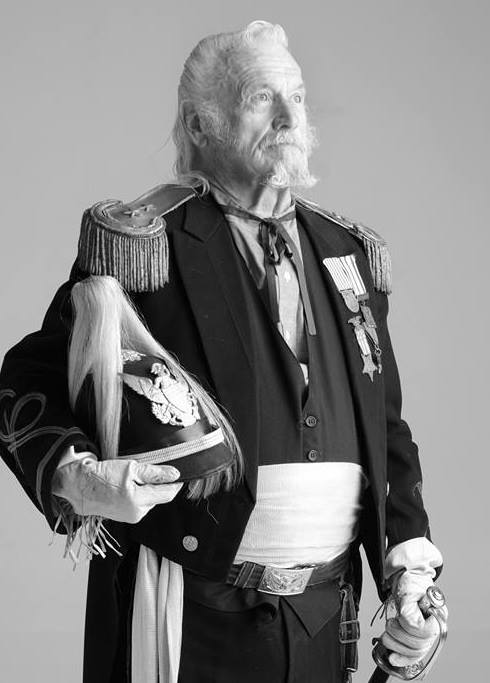 XNGH Geno Oliver has gone to the Silver Hills. He was a good friend.

Geno Oliver was born in Greeley Colorado on September 8,1932 and passed away on Sept 5, 2021, three days before his 89th birthday. He was raised in the San Francisco Bay Area where he became an Eagle Boy Scout. He served in the army during the Korean War. After his discharge he moved to Reno, Nevada and first sought work in asbestos removal. He then worked at the Zanzibar Cocktail lounge for a couple of years and then the Liberty Belle Saloon and Restaurant for 28 years as a “mixologist” (Bartender). He also spent a short time behind the plank at the Delta Saloon in Virginia City.

Geno was very active in civic affairs, volunteering at the Reno Championship Air Races and as a camel jockey in the Virginia City Camel Races. He was a Past Worthy President of the Comstock Eagles and the state president in 2016. He was a past president of the Sons of Erin of Northern Nevada and of the Reno Sertoma Club. Geno was also a member of the Friends of the Black Rock and the Veterans of Foreign Wars. As a Korean War veteran, he was proud to have traveled to Washington DC with Honor Flight. Geno was also Nevada’s representative for the Lincoln Highway Association.

Geno was very active in E Clampus Vitus, a fun, frolicking, historical organization, becoming a Noble Grand Humbug of Virginia City’s Julia C Bulette Chapter. While Humbug, he founded J.u.n.k.—Julia’s Unequivocal Nevada Klampouts. This special event was designed to make overnight treks to historic sites throughout Nevada. A docent for the Nevada Historical Society, Geno was passionate about Nevada history. He researched and wrote the history for almost every JUNK Trip.

He served the Grand Council of E Clampus Vitus as a Proctor, travelling to many other chapters of the Order throughout the West. Geno oversaw extensive restoration on the Clampers 1876 Moran Building and the 1876 Miners Union Hall, home of the Comstock Eagles. Geno is survived by a daughter, Tammy, and a grandson, and many friends and associates who will miss him dearly.

Services were held at the Veterans Cemetery in Fernley, Nevada November 12 at 1pm,

Mule Mail and the Drunk.
Story from the TRASH TREK – July 1985 book as told by Geno Oliver.

The story of the drunk is interesting as it pertains to an actual interview by Dr. Howard Driggs who spoke with Bill Streeper in the 1930’s. Streeper had worked for the Pony Express and lived in Utah at the time. When asked when he became a Pony Express rider, Streeper said: “I never was a regular rider, but substituted for them lots of times. I carried the heavy mail right over the same trail. Pony Express mail was written on light tissue-like paper and cost five dollars. It was a fast mail. The regular mail was carried on mules, and I was one of the boys that helped get the Mule Mail through.”
“My beat was a hundred miles or more in Nevada. According to the amount of mail, we sometimes used one or two more mules. Each Pony rider changed horses five or six times, and riders, too, after about fifty or sixty miles. We were passing each other all the time.
“Sometimes when a Pony rider got into trouble I had to let the Mule Mail wait and put the Pony Mail through. Pony Mail had the right of way over the Mule Mail. We didn’t have much trouble though, except when the blamed Injuns got to cutting up their mischief out in the desert. Wouldn’t have had that if some dang fool hadn’t stirred it up for us. Injuns were all right if they were treated right. I remember once when I took the Mule Mail and the Pony Mail together.
“Streeper tells this story in the interview, which kind of sounds like a Clampertale: Carrying both Pony Mail and Mule Mail came about because of “whiskey, a bad dose of it. Well, out there in Nevada some fellow set up a saloon near one of the stations. One day I noticed the horse of a Pony rider tied in front, so I stopped and went in.”” ‘Hello, Bill, Old Boy,’ the rider kind of slurred. ‘Come have a drink.’ ”
“Now mail carrying and whiskey don’t mix. I tried to get him to leave. He insisted, ‘Oh, come on, take a drink.’ “I answered, ‘It’s not my drinking day. You better come on with me”
“The Pony rider says, ‘Set ’em up for the whole crowd. Bill, have a drink.’ ”
“I shook him off and said ’twasn’t my drinking day. I tried my best to get him out of the place, but finally I gave up and left.”
” ‘Here’s to you, Bill,’ he said. ‘I’ll ketch up with your ole mules for you get a mile.’ “
“I had been on the trail about three or four miles when I heard him whoopin’ and hollerin’ behind me. A minute later he shot past me on a dead run, yellin’ some drunken remark about eatin’ his dust. About half an hour later, as I turned a bend of the trail, I caught sight of the Pony rider stretched out full length on the trail with his horse standin’ still right by him. The thought flashed over me that the Injuns’ got him and he was dead, but I soon found out the only dead he was was dead drunk.”
“It was certainly a tough problem for me. I couldn’t leave him there in that dangerous spot. It was up to me to get him and the Pony Mail as well as my Mule Mail through. I shook him, pinched him, kicked him, but he just lay there like a log. I took my lariat and looped it under his arms, and after a lot of tough work I finally got him across his saddle and lashed him there, tyin’ him tight. Leadin’ the horse with my pack mule, we went on down the trail.”
“About an hour or so later, and about a mile from the next Pony Station, he began to wake up. Soon as he got enough sense to take in the situation, be began to beg me to untie him.”
” ‘No you darned cuss! I’ve had enough trouble with you for one day. You’re goin into the station just the way you are,’ and I jolted him harder than ever.”
“He was cryin’ and pleadin’ all the time to be let loose. Well, finally I felt that I had given him punishment enough, so I stopped and untied him from his horse. He had a lot of explainin’ to do, and why he was so behind schedule. They let him carry the mail on, that time, there bein’ no other rider to take it, but it was the last time I ever saw him on the Pony Express!”