The Storied History of the ECV Building

The Storied History of the ECV Building 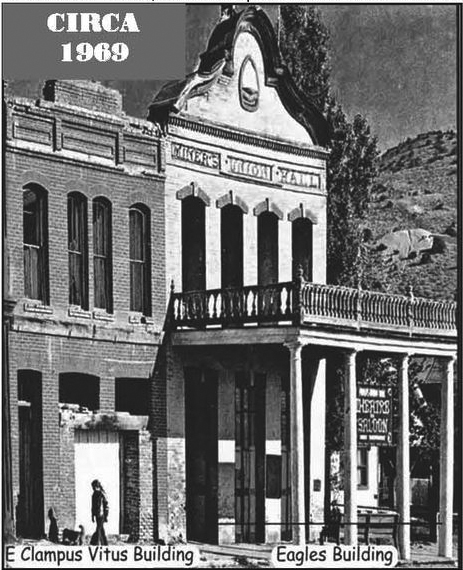 Home of the Julia C Bulette 1864 in Virginia City

When World War II arrived, Nevada’s Virginia City was not much more than a ghost town. The mines had largely dried up and any production of gold and silver was deemed non-essential to the war effort. The town was barely surviving with less than 400 resi­dents at the time. As the US Army prepared troops, they made many demands upon the areas where they placed training bases. In portions of Nevada, this meant local county governments were “forced” to shudder houses dedicated to certain adult pleasures.

Between the mines and the miners’ best friends, the town suffered greatly. Rundown and ragged, the jewel of the Comstock was far from the towns depicted in the old west and idolized in movies and eventually television. But, for speculators with vision, it held promise as a future tourist destination. What was needed was some luck and TLC.

After the war ended and the 1950s passed, several forces converged to drive this town -with its colorful past (often times made up) into today’s modern tourist destination. First, those soldiers returning home sought out new lives and new adventures on the road and “out west.” Spurred on by romanticism of the Old West in books and movies, stimulated by television westerns such as Gunsmoke and Bonanza, younger Americans, including many from the Beat Generation, sought new adventures.

As Nevada’s largest city – until 1960 – Reno was less than an hour from the Comstock. With slowly renewing interest in this old western town – a remnant of another era, a century old – things began to slowly change. In 1961, along with Gold Hill, Silver City and Dayton, the town was designated as a National Historical Landmark.

Entrepreneurs and some colorful characters, looking for a more quiet and colorful existence, began to come. Properties slowly began to sell and upgrades began. While more authentic of the old mining towns before this renaissance, new owners took to decorating bars and stores with any type of antiques that the movies had shown as period appropriate. Before the war, the town was crumbling and land was cheap. A few people began to recognize the town’s potential as nearby Reno continued to grow. Still, it was a town of mostly dirt roads with tumbleweeds rolling through with the daily wind. Against this backdrop, a few gents with foresight knew this locale was the perfect setting for the first exclusively-Nevada chapter of E Clampus Vitus. Their dreams carne to fruition on June 1, 1963, when this group was awarded a charter in the name of Julia C. Bulette 1864 Chapter.

Great things would lie ahead for this group of early leaders which included first Noble Grand Humbug Louis Beaupre, Marsh Fey, Jim and Ed Lydon and Dail Turney among others, but it wasn’t until a few years later that the odyssey now known as the ECV Building began.

On a typical hum drum workday in early-1969, while attending to friends, curious tourists and Reno luminaries at his restaurant, the legendary Liberty Belle in Reno, Marsh Fey (XNGH ’64) was greeted by Louis W. Berrum. Berrum’s family had deep roots in North­ ern Nevada going back well into the 1800s. He was well-known for his Moana Hot Springs just three miles south of downtown Reno. Fed by natural hot springs, the site included a large bath house with pool, hotel, clubhouse, lush grounds and baseball diamonds.  Opened in 1905, the site was popular with locals and former heavyweight boxing champion Jim Jeffries chose it as a training facility while he prepared for his 1910 bout with current champion Jack Johnson.

World War I caused a downturn in the economy and in 1917, the original owners of the Hot Springs sold the property to Berrum who owned the trolley line that ran to the location from down­ town Reno. In 1957, the City of Reno acquired the resort, demolished the old buildings and replaced the1n with a municipal pool and wooden baseball stadiun1. By that time, Berrum was quite well known. Before his death, he had become a Trustee of the Knights of Pythias in Virginia City. Now, he and his group had a need and an intriguing offer he wanted to discuss with Fey.

In Virginia City, between the Knights of Pythias Hall and the Miners Union Hall, there was a long, narrow piece of land with ruins which included a single row of brick for a front wall and a cliff up to A Street in the rear. No side walls existed. Previously, a roof was suspended from the buildings on both sides.

The “building” had been vacant for more than 30 years by this time. Not that Berrum thought he might find a “sucker” in the organization; but instead knowing Fey was a sharp businessman, he told of the property’s availability. The Graybeards of JCB had the foresight to know the offer deserved serious consideration. Soon afterwards, the offer was accepted for the sum of $3,000 to be payable over three years; along with an agreement that the chapter would make improvements required for a hall to be built on the property.

Three thousand dollars was a sizeable sum in the late 1960s when ECV rubs typically ran $10 or less. Brothers wondered how such a huge project could be quickly taken on and the first installn1ent raised. A very interesting idea popped up and “stock” (of no monetary value) in the new building was sold to raise the initial $1,000 payment. By December 1969, the deed was in JCBs hands.

Two more $1,000 payments were due the following years and plans continued to be bandied about for raising the monies for improvements. Throughout the 1970s, the hall remained in its original condition with a dirt floor, no side walls or roof.

Over that time, many suggestions were made about how to raise funds for initial improvements. A winning formula was hatched finally and in 1978, a very well-attended Clamp Convention was held in Reno at the newly constructed MGM Grand Hotel. Clampers came from near and far. More than $8,000 was raised for the building fund and construction finally began.

All work in the ensuing-years was done by volunteers. First, there was consideration given to the side walls. The two existing buildings’ exteriors were in good shape so the new walls could go up alongside. Now, finally this “building” would have its own side and rear walls for the first time. Norm Buckey installed the first-floor walls with concrete block purchased by the chapter. Danny Costello (NGH 1993), who worked at Martin Ironworks in Reno, donated the rebar for the block walls.

Dail  Turney  (NGH  1970, SNGH  1985-86) worked on plumbing and electrical construction for the chapter and eventually the kitchen which came a bit later. In 1979, when Marsh’s son Augie (NGH, Floating Whang) was initiated in 1979, the sign-ins were still being done inside the structure on dirt floor. Poor Blind Candidates were then taken else­ where for the Hall of Comparative Ovations.

Throughout these years, sales of stock and other items continued to raise money for the building fund. Several memorable buttons were used exclusively to bring in additional funds. Oliver (NGH 1980) and George Courson (NGH 1984) handled financials during the first decade.

After Buckey completed the first-floor side walls, work began on the second story of the block wall, led by Elmore Chandler and “Murph.” Afterwards, Oliver and Bill Kennedy (NGH 1982) worked on the rafters and roof which was completed by the early-1990s— more than 20 years after acquisition of the property.

When the cement was finally poured for the ground floor, a portion of Click Slocum’s (NGH 1977) ashes were mixed in so he would rest eternally at the place he loved most. The remainder of his ashes  were spread at  the  Geiger  Summit  between Virginia City and the Truckee Meadows.

Oliver initially began coordinating the project and continued until the cement block was up to the second floor. Then, Daniel Bowers (NGH 1995) took over with the help from Tom Brophy, Turney, Ron Cox (SNGH 1986-87). Jerry Kunze provided plumbing materials which were installed by Turney, Bowers, Brophy and Elmore Chandler.

More delays occurred at the hands of the Storey County Building Department. Initial plans were rejected and new plans cost an additional $1,500. After they were drawn, they were likewise rejected; but subsequently, the original plans were approved un­ der rules for restoration of historic building.

To raise this money, several buttons were created to cushion the unanticipated expense of drawing those soon-to-be rejected plans.

The matter of the back wall was a nightmare unto itself. It backed up to a hillside and eventually, had to be dug down 17 feet for the bottom of the back wall. Originally, the building inspector wanted the building to drain to the back and then a pipe from there to run out to the front street. After pipe was laid for this, he changed his mind and wanted the pipes to empty water directly toward B Street. Original pipes were abandoned and new ones were laid.

By early 1995, the second story wooden floor was installed and Brophy, a carpenter, and Jim Lydon built the grand staircase. Lydon was also in charge of the balcony construction in the front of the building. Fey and Chip Gash (NGH 1979) built the hand­ rails for the stairs.

It was finally time for the first formal event, hosted by NGH Bowers. The Widder’s were greeted in 1995 with a grand banquet in late-October near Nevada Day. The second-story bar was operational and the famous backlit artwork was in place. For Widder’s Balls, she is sometimes covered up with a makeshift bikini. This famous photographic piece behind the bar was procured by Bill Sawyer (NGH 1988) from the Har­old’s Club collection. While the club was open, Sawyer took care of the calliope and tuned pianos. He was also known for playing the tuba. [NOTE: In Virginia City, we have a Nevada Day Ball… because our Widders don’t have balls. –M]

Since its grand opening, the brothers have added a great deal of E Clampus Vitus memorabilia to the walls, including artwork of famous people in Storey County History, Old Clamproclamations, a myriad of photographs – including the first dozen or so Noble Grand Humbugs – and encased in a glass alcove halfway up the stairway – the original charter.

Smokers have been held over the years, beginning with one during Bowers’ Humbuggery. Television shows have been filmed there and many a Nevada Day Silver Ball has been favored by the lovely Widders. Truly a treasure that every Clamper should visit, the building was formerly known as the Moran Building for its longest-tenured owner, W.T. Moran. He used it as an office for his surveying business from 1905 –  1938.   In 2000, it was renamed the E Clampus Vitus Building and a plaque was placed by the front door to make this official. Now, for more than 52 years, Julia C. Bulette the longest-tenured owner.