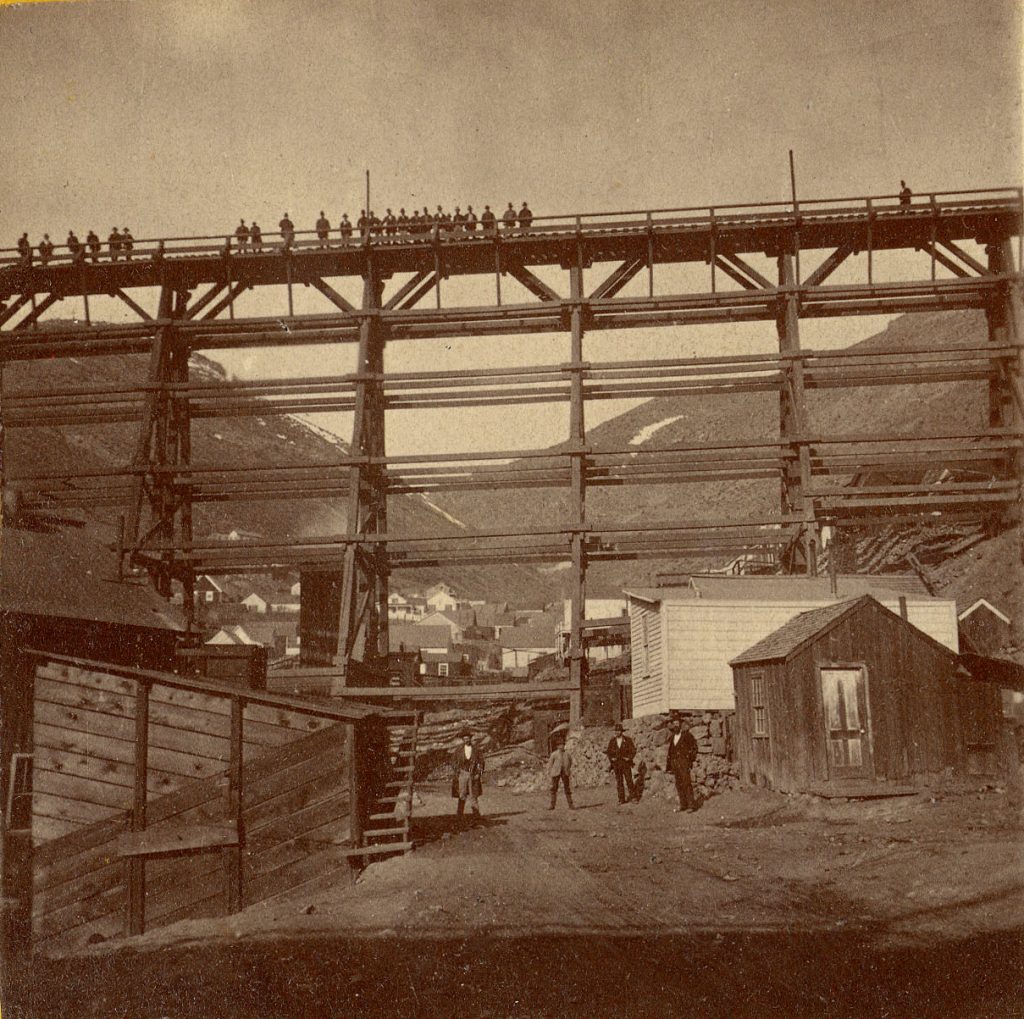 The Queen of the Short Lines

In the beginning (1859) there was a nascent City on a silver mountain. It needed a connection to the outside world, means to lug fuel and construction supplies up the grade and a much more convenient way to work the marginal ores from the many mines. William Sharon, Agent for the Bank of California, offered low interest rates, manipulated local operations and obligingly foreclosed when the mill and mine operators defaulted. Surveys were made, Bribes deposited, special interests advocated for their routes but no tracks were laid before the Bank schemed to get the taxpayers of Storey, and Ormsby Counties to pay $500,000 for them. Local enterprise donated $700,000. Bonds for the construction took decades to pay off, the Bank, Sharon, William Ralston and Darius O. Mills, built their railroad for no money down. Sharon told mining engineer Isaac E. James ‘’Do it at once!” and ground was broken in February of 1869. Tunnels were burrowed, grades were cut. Chinese workers were not allowed above American Flat. The line was completed from Carson to Virginia City in January 1870.

Shipments of ore down to the nine mills in Brunswick Canyon commenced immediately. Henry Yerington, a lumberman and flume builder was the Railroad’s Vice President and General Manager from 1869 till 1910. A spur to the end of his flume in Kings Canyon was added and a branch to Clear Creek served the Carson & Tahoe Lumber & Fluming Company from Spooner and Glenbrook. Carson River lumber and cord wood was cut all year then shoved into the stream in Spring to be fished out at Empire at the bottom of the hill.  The Reno extension was completed to the transcontinental line in August of 1872. Fuel, lumber and more from the Reno connection, additional lumber from Huffaker and Lakeview crowded the line uphill and loaded ore cars rolled down. They stripped the Sierra forests clean from Markleeville to Beckwourth, squeezed much of it into their gaping shafts and burned the rest. 30 to 45 trains a day handled the business. In four years the rail needed replacement with heavier steel. Carson City was the Headquarters of the Railroad. A yard and an eleven stall Roundhouse made of Prison Hill rock was built to maintain, build and rebuild all the Railroad’s locomotives and rolling stock. The facility serviced the needs of many mines and all the Railroads in Western Nevada and East of the Sierras. The section foremen were all called Tony.

Revenues declined in the 1880s. The Carson & Colorado narrow gauge line was built from Moundhouse to points South and East starting in 1880. It rolled down to the Carson River at Dayton and headed South to the Walker River area through the low spot, Adriaan Valley, a unique area where pluvial Lake Lahontan once flowed both directions between the Carson and Walker drainages in prehistoric times. The purpose was to tap into new Bonanzas and prospects from Aurora, Belmont, Bodie and Candelaria. Eventually the line reached Owen’s Lake. In 1903 the H.F. Dangberg Land & Live Stock Company gifted 158 acres to the Railroad in the newly planned community of Minden for a yard and wye, as long as they built no further South. August 1906 the Minden branch began operation. The Dangbergs corralled the County Seat from Genoa and controlled all aspects of Douglas County’s economy with their Bank, mill and manufacturing facilities. Gardnerville chartered its own Railroad connection but the Dangbergs strangled that enterprise.  Resentment remains to this day.

In 1900 the V&T sold the Carson & Colorado to Collis P. Huntington of the Southern Pacific. Fortuitously the new strikes at Tonopah in 1900 created demand for mass quantities of supplies. A bottle neck at Moundhouse, the junction with the C&C required transloading of freight from standard to narrow gauge cars. The SP began standard gauging the line from Moundhouse to Tonopah Junction when the Tonopah Railroad was connected in 1903. An offer was made for the V&T but refused by Yerington. The new owner of the SP, Edward H Harriman, built a line from Hazen on the SP mainline to Churchill in Adriaan Valley, bypassing the V&T altogether in 1905.

The V&T was world famous. Virginia City was a prosperous, popular and entertaining destination. Three Presidents (Grant, Hayes and T. Roosevelt), European royalty, celebrities and other dignitaries rode the line. By 1933 the last owner, Ogden Livingston Mills, kept it afloat with his pocket change but at his death the mainline to Virginia City was abandoned. Due to automotive competition, deferred maintenance and financial impotence the last run on the legendary Virginia & Truckee Railroad was May 31st, 1950

The fifth Reno station, built by the Southern Pacific in 1926 still stands. From there the V&T main line curved around where the front of the Ballpark stands today. Down by the River the abutments for both sides of the Truckee River Crossing still lie in situ a short walk from the Auto Museum. The line’s Reno engine house, turn table and square water tank stood in what is still an unfinished construction project South of the river. From there the V&T rolled down Holcomb Street on the west side. The homes on the east faced the tracks and there are none on the west side of Holcomb. It curved again by the Reno Race Track, now Shoppers Square where the Brakeman could get a good look at his train, which came fresh off the SP.  The National Historic landmark, Landrum’s (Beefy’s) building, a diner kit, was unloaded from a flatcar to its lot on Arroyo Street in 1945. Browns, Huffaker and Anderson were passing tracks and stations for farms and lumber in the Truckee Meadows. The V&T shadowed Virginia Street the distance to Steamboat Springs.

South of Steamboat the line crossed what is now old 395 at Pleasant Valley and started climbing to the west under the new Galena bridge and up the Steamboat Creek canyon to Washoe City. The canyon is great place to hike with trestles and tranquility. Washoe City was the County seat at the time of construction. The old Right of Way across Washoe Valley can be seen crossing present day I 580 South of town. Franktown had a siding and another square water tank in Washoe Valley. On the east side of old 395 Southbound a tiny trestle remains in place if you look quick. Old State Route 3 was built alongside the railroad in the 1920s. The main crossed the highway near Bellevue Road and swung wide to gain the hill at Lakeview, in plain sight of the present freeway. A spur serviced the end of the Hobart Company flume at Lakeview where lumber from Tahoe traveled up the Incline, through the tunnel and down the flume. The Railroad grade down to Carson wrapped around the hillside, Tunnel #1 caved in and a shoofly was built around it, all visible from the freeway. It’s a nice hike from behind Western Nevada Community College to Lakeview on the right of way.  At the bottom the V&T rolled right up Washington Street, two blocks from the Governor’s Mansion, the Mint and the Bliss and Yerington houses to the depot. The Carson City V& T depot, built in 1872, is now the meeting hall of Carson City Freemasons Masonic Lodge #1 since 1952. Nothing is left of the Carson City roundhouse or yards at Plaza and Washington. The stone was expatriated to Napa.

The line went along the road to Dayton, now US 50 to Empire City on the Carson River where 9 mill and dam foundations still litter the bottom of Brunswick Canyon. You can still drive the right of way and as the rail line gathers elevation for Virginia City the Carson River drops toward its sink. Traditional swimming and kegger area for Carson City youngsters. From the Canyon the line went North, crossed the old Emigrant Road into Moundhouse. Today the part of the right of way owned by the Nevada State Dept. of Cultural Affairs swings West and Crosses US 50 on a repurposed Union Pacific bridge from Las Vegas. There was a yard and junction with the narrow-gauge Carson & Colorado RR at Moundhouse. Freight had to be transloaded from one gauge equipment to the other until 1904. Now Moundhouse is an industrial area and some local train pulling is done at XPBC Denis Hof’s establishment a block away for a small, collective bargaining reimbursement.

The historic route heads up the hill and around the bend above Devil’s Gate to Scales and American Flat. A spur track served Silver City. Above Gold Hill the railroad crossed the famous Crown Point Trestle, 351’ long, 85’ tall, 184,538’ of old growth forest, 19,280 lbs. of iron hardware. Painted red.  A laborer fell off and died during construction. The Ravine has been completely filled in with tailings; the lumber plundered. A little yard served the Gold Hill Depot. From the Depot to Virginia City the restored railroad is owned by the Gray family. The State doesn’t own any rolling stock. The State and the Grays have a symbiotic relationship.

Leaving the Depot we cross Highway 342 below Fort Homestead. Tunnel 3 is partially caved in so the line has a shoo fly around it. Tunnel 4 has been restored and soon we arrive at the heritage railroad’s service facility and yard. The old V&T passenger depot functions again and here you’ll find their collection of rolling stock. The South portal to Tunnel 6 is hiding behind the depot but the E Street cavity under Washington and Taylor Streets in front of St. Mary’s of the Snow still exists. Funds have been obtained to open the E Street tunnel but no date has been set. The freight house on E Street is the end of the line. In the day spurs traversed the town to the major mines.

The Minden branch rolled down Stewart Street in Carson City from a big wye in the yard. Stewart Street is behind the State Capital. There was a whistle stop for Stewart Indian School. Built by the state, opened in 1890 and sold to the Federal Government as part of the Compulsory Education Act of 1891 the school helped assimilate Native-American children into Christian Society by force and taught trade skills. The bents for the trestle bridge over the Carson River still stand and the line went due south on Heybourne Road straight to Minden where there was a wye to turn the power and small yard serving the Dangbergs monopolistic infrastructure.

History of the Comstock Lode, Grant Smith, Nevada Bureau of Mines and Geology