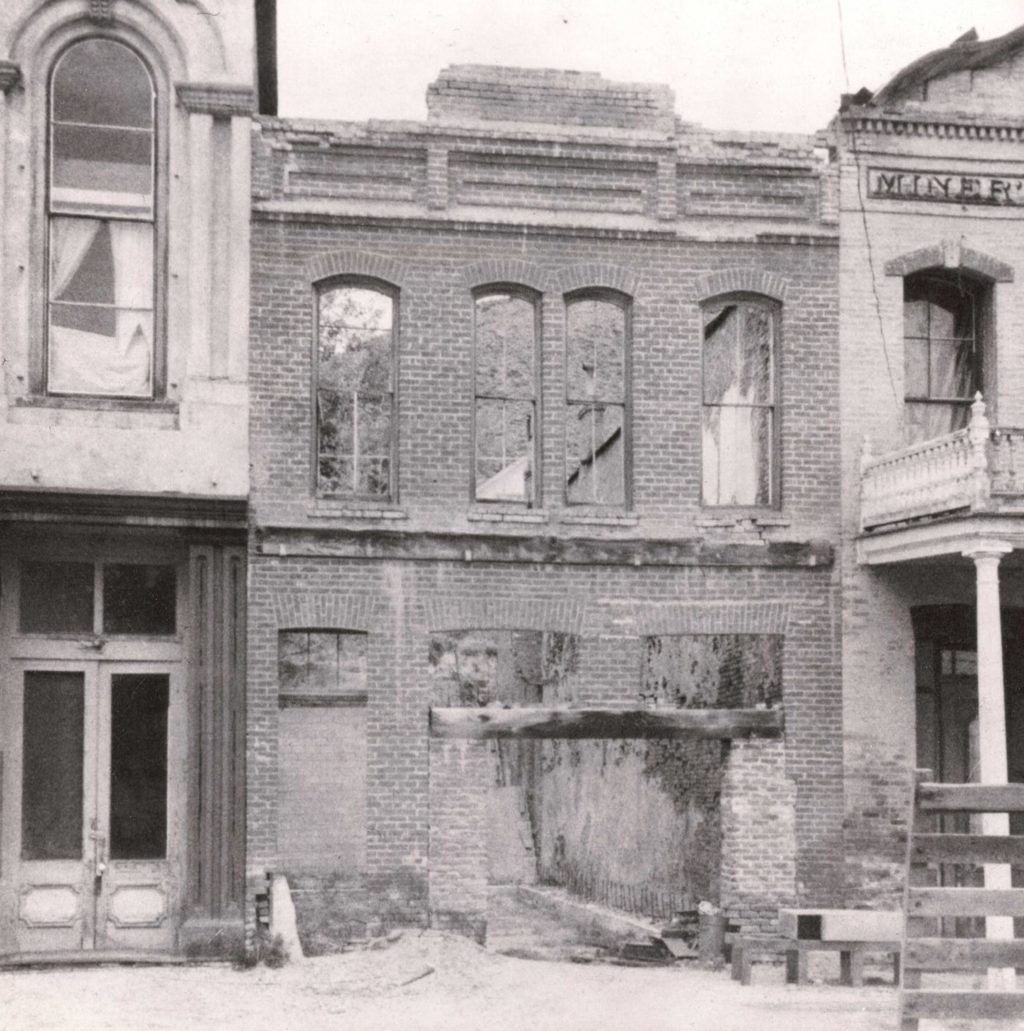 Louie Berrum of Moana Hot Springs fame as Knights of Pythias trustee offered the ruins and lot between the Pythian Armory and the Miners Union Hall on B St. in Virginia City Nevada to Julia C. Bulette #1864 in 1968. It had a single row of brick for the front wall and a cliff up to A St. in the rear. In the past, the building had a front and back wall and the roof was suspended from the two edifices on either side. A surveyor named W. T. Moran was the last occupant in 1938. Part of the impetus to sell was an obligation of Julia to build the hall and help stabilize and reinforce the historic structures on either side. The deal was 3k in 3 easy payments and by December 1969 JCB had the deed.

In 1978 Marsh and the gang threw an annual Nevada Day Clamper Convention at the MGM and made $8,000 to begin construction on our building. Myron “General Geno” Oliver organized volunteer work parties, the Sublime Dail Turney wired and plumbed the erection. George Courson was invaluable as Treasurer. Norm Buckey began the block work, Elmore Chandler repaired the front façade and finished the 2nd story. Bill Kennedy oversaw the installation of the trusses and roof. Tom Brophy and Jim Lydon built the staircase, Marsh Fey and Chip Gash built the handrail and railings.  Chip, Marsh and Skip Pennington finished the sheetrock. Mr. Gash supervised the balcony construction. Mr. Fey also mentions work by Gary Constantine, Jay Ticer and XSGNR Peter ‘’Skeeter’’ Van Alstyne. After 16 years of improvements by Clampvolunteers, Dan Bowers held the first event utilizing the complete facility in 1995. Mark Bebout and Tim Pierce have kept up the maintenance and further improvements in their day. Click Slocum’s ashes were mixed into the concrete for the floor.

Julia treasures their Vituscan Cathedral, a pillar in our community, dedicated to all Officers of Equal Indignity. Every Clamper is welcome to exercise their constitutional right to assemble in the ECV Hall in Virginia City.

Rebuilt in 1876, The local Virginia City Miner’s Union (from 1867) owned the building till 1913. Home of the Mother of all 19th century miner’s unions, the building was headquarters for an organization that struggled with Capital for Occupational Safety, Family Welfare including death benefits for widders and orphans and a living wage of 4 dollars a day. Clampers were among the founding members of this group. The Union was prominent in Storey County and Nevada State affairs, many members being elected to higher offices with the union’s support. The hard rock mining industry in the United States began in Virginia City. The contracts and agreements written and approved by the members in this building were the model for Labor agreements in the mining industry from the Yukon to Mexico .

In 1913 due to rival radical unions, the Western Federation of Miners and the Industrial Workers of the World, government interference and a decline in local mining opportunities the Union sold out and the flourishing Fraternal Organization of Eagles, Comstock Aerie #523 purchased the building for $1,400. The 1st floor was rented out for offices, storage and as a theatre over the years. The Aerie flourished for 80 years but by the 90s only a handful of members remained. In 1996 Don Showalter with help from Bob Romer and the Carson Aerie #1006 filed for dual-membership and became the next President. In 1998 Peter Van Alstyne of JCB fame became President and seduced numbers of Clampers to join the Eagles and secure the future of the Aerie and this historic monument.