The Colorful History of the Nevada California State Boundary

The Colorful History of the Nevada California State Boundary 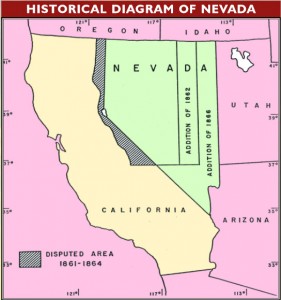 Thanks to Jeff Johnson. This is a great article.

“With the outbreak of the Civil War the mountain of silver under Virginia City became critical to national security. Nevada became a Territory by Act of Congress on March 2, 1861….“It is interesting to note that longitude is not referenced to Greenwich, but to Washington, D.C….“Nevada Territory’s land description set the stage for a minor civil war even though it acknowledged that the overlap would continue to belong to California until and unless she ceded it to Nevada Territory. These qualifying words did not stop Plumas County, California, and Roop County, Nevada Territory (now in Washoe County, Nevada) from exercising jurisdiction over the same ground in the vicinity of Honey Lake Valley. The powder keg exploded when the Roop County judge arrested the Plumas County justice of the peace. This outrage prompted the Plumas County sheriff to arrest the Roop County judge. Before long shots were fired and blood was shed. Fortunately, a truce was declared before things got completely out of hand and each side resolved to petition their governor for an equitable solution. Clearly it was time to put state line monuments on the ground.”